Reposted from Patch.com
by Chris Dehnel 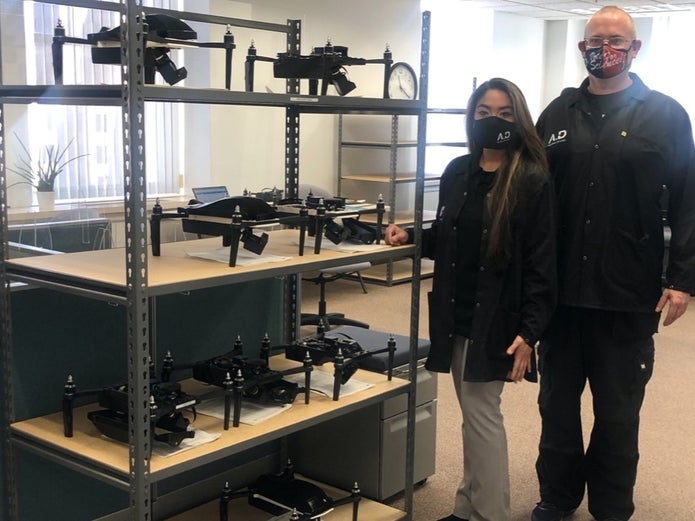 The burgeoning drone industry has turned into a new path of success for two north-central Connecticut residents who were feeling the stresses of the coronavirus pandemic.

And Hartford-based Aquiline Drones was all too happy to bring them aboard.

Joseph Gates, 42, of Vernon, had built a career as a lighting and video system technician in the entertainment industry.

Then the coronavirus pandemic struck and his career prospects turned dark. He remembers one moment nearly a year ago vividly.

“On March 13, 2020, I was halfway through loading the HSO show at the Belding Theater at the Bushnell in Hartford when COVID shut things down completely,” Gates said.

Fast-forward nine months later. Gates said he was worried about not having enough money to pay his bills and had to borrow money from family and friends with unemployment benefits set to run out the third week of December.

Gates said it was a struggle to find work, even though his resume includes openings at venues like the Animal Kingdom at Disney World, the Basketball Hall of Fame and the Casino of the Sky at Mohegan Sun.

Then on Dec. 14, he landed a job as a technician at Hartford-based Aquiline Drones, the first drone manufacturing and assembly plant in Connecticut. After just two weeks, he was promoted to production supervisor and is now managing a team of 23 employees.

“I was terrified that my skills would not be a fit for a manufacturing tech position,” Gates said. “But I soon realized that all of my skills — like soldering wires, computer programming, re-wiring things, troubleshooting and leadership — are applicable to this job.”

“I had a job, but I always had an entrepreneurial spirit,” said Hernandez, whose quest for career fulfillment had led her from retail management to criminal justice to government.

Hernandez said she was working as an administrative assistant in the Personnel Division of the Hartford Police Department when a mutual associate connected her with Barry Alexander, the founder and chairman of Aquiline Drones. The prospect of joining the growing drone enterprise that not only produces made-in-America commercial drones, but also provides advanced drone solutions and services, was an opportunity that Hernandez said she couldn’t pass up.

“It was perfect timing as I had lost my passion and was excited for a change in environment and career,” she said. “I believe in Barry’s vision for Aquiline Drones and I know it will be successful.”

Hernandez and Gates are two of the 25 newly hired technicians working in Aquiline’s 7,000-square-foot, state-of-the-art drone manufacturing and assembly lab.

Aquiline has hired several of its new manufacturing employees with the support of Capital Workforce Partners, one a north-central Connecticut workforce development organization. CWP has a statewide reach that helps businesses find, retain and grow the most qualified talent.

CWP also helps adults develop skills necessary to thrive in the state’s job markets and directs them to employers seeking those talents.

“In September 2020, Aquiline Drones partnered with CWP to promote career opportunities, source candidates, and to connect with workforce development initiatives.

Said Alex Johnson, the president and CEO of Capital Workforce Partners, “Since then, CWP, along with its partners at the region’s American Job Centers, has screened and recruited more than 60 candidates, filling 23 maintenance tech roles, while leveraging a National Dislocated Worker Grant and federal CARES Act funding to help Aquiline Drones offset employee training costs.”

Johnson said the partnership has also led to new collaborations with regional training providers including Capital Community College and the College of Technology.

“Our leadership team is not only pursuing our vision of building a drone empire, Alexander said. “We are invested in creating meaningful career opportunities for the tech industry of the future – right here in Hartford.”

Alexander said the company will continue hiring production technicians as well as positions at a soon-to-be-opened showroom and retail store in Hartford, plus manufacturing positions at a larger facility within the state.

Hernandez said that her job satisfaction goes well beyond earning a living.

“My proudest moment at Aquiline Drones was software testing the drone that I assembled. To see it fly was a real sense of fulfillment,” she said. “I tell myself to do something that scares you each day because every day is a dream and working here is certainly a dream come true.”

For Gates, his greatest accomplishment at AD thus far has been “seeing the professional and personal advancement of my team.”

Aquiline is an American drone and cloud solutions company located in the financial district of Hartford. It was founded by highly experienced aviators, systems engineers, IT gurus, and business strategists.