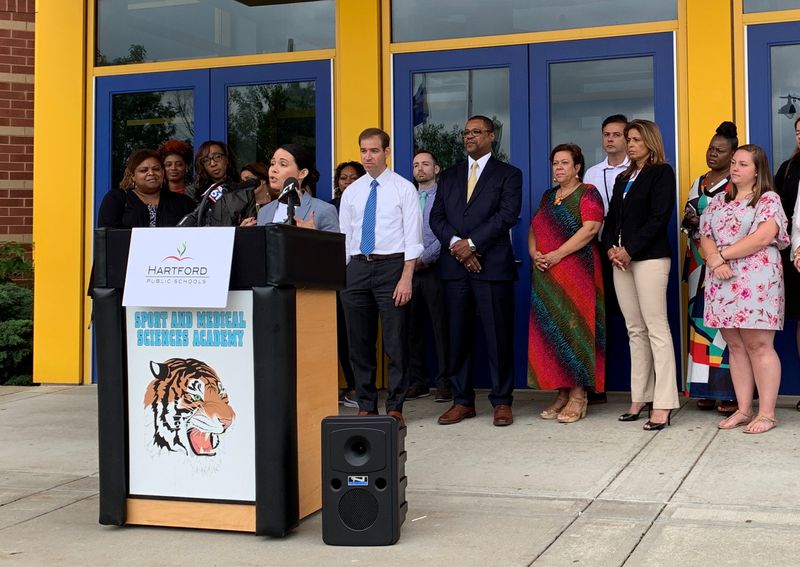 Hartford students entering ninth grade at any Hartford Public High School can earn $20 each day they attend summer school for four weeks this July, the city and pubic school system announced Wednesday. Registration for the program, which is called Summer Bridge, is open now.

The new program will offer students $400 each for attending high school prep classes five days a week between July 8 and August 2. Students will receive $100 for each week of perfect attendance. Hartford Public School teachers will lead the classes, and the student pay is provided by the Capital Work Force Partners, city funds and private donors. Superintendent Leslie Torres-Rodriguez said the program has space for up to 700 students.

“It’s the first time we’re doing this,” Torres-Rodriguez said. “We’re trying to lessen that anxiety about high school for our students.”

Torres-Rodriguez said the school is facing an emergency in its absence rates and that this past December administrators, city officials and other groups came together to plan a way to reduce students’ absences.

“This is an opportunity for the city of Hartford to stay in school and remain on track to graduating high school,” Torres-Rodriguez said.

The idea to pay students for attending Summer Bridge came up “from the get-go,” Torres-Rodriguez said. The school district’s partnership with Capital Workforce Partners came about as a way to provide students additional rewards other than grades or graduation.

“We want to get them thinking about careers and the balance and work and school,” said Alex Johnson, CEO and President of Capital Workforce Partners.

Doug Harris, a professor of economics at Tulane University, said the Summer Bridge program is approaching the incentive system in the right way, but it would likely be more effective if it involved further incentives throughout the students’ freshman year.

“Having the rewards be frequent and immediate, so the idea of giving them $100 at the end of each week if you want them to attend, that is likely going to be an effective way to do it,” said Harris, who studies educational incentives and college access programs.

However, he said follow up will be important in ensuring the students graduate within four years. He also pointed out that students’ frequent absences likely aren’t based in a choice to skip school.

“I think the absence problem is not because kids don’t want to go to school. It’s often because they don’t have a way to get to school or they have other responsibilities,” Harris said.

The concept of cities offering cash incentives for high school students to stay in school isn’t new, and studies have shown mixed results of its long-term effects.

Almost a decade ago, Memphis and New York City briefly ran trial versions of a system called “Family Rewards 2.0” that gave money to low-income families for meeting certain health care, employment and education goals. It began in 2011 and ran for four years, involving around 1,200 families in each city.

The Memphis program offered students who met attendance goals $40 a month, in addition to cash for test taking and final grades. According to a Politico report, A’s earned $30, B’s were worth $20 and C’s earned $10. The state wrote $50 checks to students who took college entrance exams, like the SAT or ACT. The program also offered cash to parents for maintaining employment or for visiting a dentist’s office.

Education and social policy research group MDRC found that though Family Rewards 2.0 met short-term economic goals, it did not affect high school students’ progress. Students in the program graduated from high school at the same rate as students not in the program after four years.

Harris said that even though students may not graduate, increased attendance during their time in school, however brief, is still positive.

“It’s possible that they’re going to school more often but not graduating,” Harris said. “That’s good by itself in that you’re getting them off the streets and into a safe environment.”

The Hartford Public Schools program stops short of the monetary rewards offered in the Memphis program, but is rooted in the same idea of paying high school students to attend class.

Mayor Luke Bronin said he hopes Hartford’s Summer Bridge program helps students understand that “every day matters.” He said the city and school district have noticed a drop off in attendance from eighth to ninth grade.

“This is one piece, but a very important piece, of our broader effort to reduce absenteeism and to make sure our kids are in school,” Bronin said.