James Rosado was laid off from his insurance job. Now he stands to earn a six-figure salary working in manufacturing.

Reposted from the Hartford Courant
by Rebecca Lurye 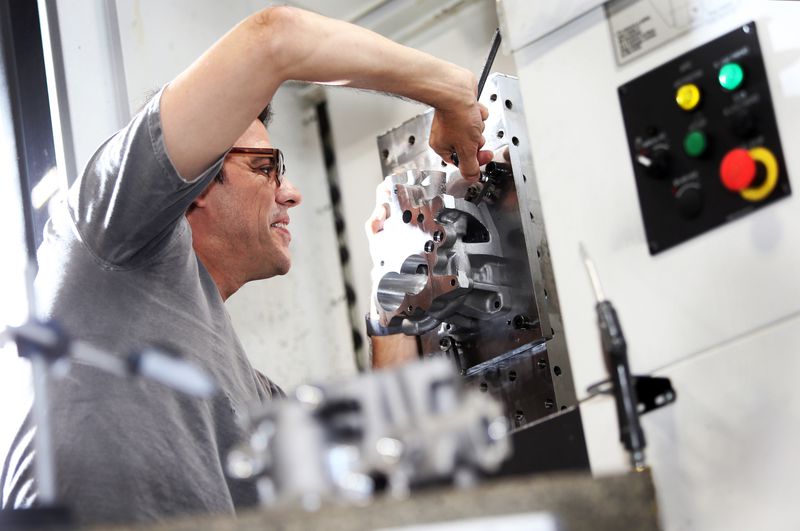 James Rosado works at a mill machine at CBS Manufacturing Co., an aerospace parts maker in East Granby. Rosado is a former underwriter who, after being laid off from several jobs, trained with Capital Workforce Partners to break into the manufacturing industry. He took part in a program for “dislocated workers,” which takes employees laid off from shrinking industries and transitions them into growing fields like health and manufacturing. (Stan Godlewski / Special to the Courant) (Stan Godlewski / Special to the Courant)

James Rosado was 45 when his insurance job in Avon got cut, leaving the mid-career underwriter and manager to hunt for work in a contracting industry.

After two years of trimming money from his 401(k) and drawing on public welfare, desperation drove Rosado to a job managing a group home, but the West Hartford man was laid off again last spring.

This time, a job services program for displaced workers helped the longtime professional break into a more stable industry, by retooling him as a precision machinist. Returning to school at age 50 to study manufacturing felt like an adventure to Rosado, a self-proclaimed geek who grew up watching science fiction movies and playing with early home computers.

“Technology is such a strong factor in manufacturing and producing pieces that are down to microns, where only a computer can help you get there, it’s neat,” Rosado said. “The worst thing about getting old is that fear of missing out on the cool stuff we were supposed to have — jet packs and flying cars. But now I’m part of things to come.

“I went into this field because I saw it as the field of the future.”

Rosado is one of about 135 people this year to enroll in a regional program for those cast out from Connecticut’s sluggish job markets, like insurance and retail, to break into fields where they can advance, like manufacturing and health care. Capital Workforce Partners has been spending about $2 million a year to help laid off, or “dislocated,” workers, but the Hartford-based job services organization is nearly tripling its footprint this year after receiving $5.88 million in grants from the U.S. Department of Labor.

CWP expects that money to support up to 500 people over the next two years by funding their skills training and placing them with employers in Greater Hartford. 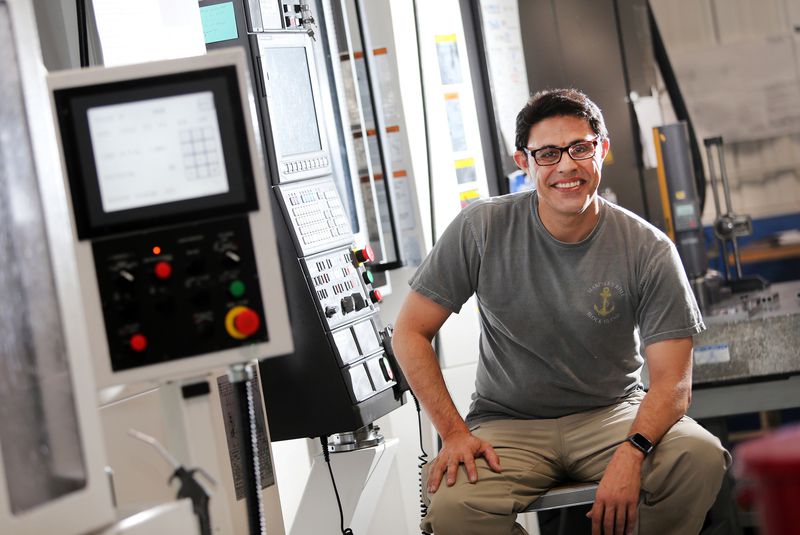 “I went into this field because I saw it as the field of the future,” says James Rosado, a former underwriter who received help from Capital Workforce Partners to retrain for the manufacturing industry. He works for CBS Manufacturing Co., in East Granby. (Stan Godlewski / Special to the Courant)

With the help of CWP, Rosado earned a scholarship to Asnuntuck Community College in Enfield. He made the dean’s list and graduated on May 23. Five days later, he started work at CBS Manufacturing Co., an aerospace parts manufacturer in East Granby.

The federal grant is covering a portion of Rosado’s salary so his employer can afford to continue his training. That’s often a hardship for small shops, but it’s a worthwhile investment. Rosado is on his way to becoming a journeyman machinist, someone who can move up the ladder of CBS as older employees do the same or retire.

Skilled workers are nearly impossible to come by because of the increased demand on aerospace manufacturing and slow development of a workforce pipeline, CBS President Steve Lawton said. His company has relied on training programs and apprenticeships to add five people in the past six months, and he would add two more jobs today if he could find the right workers.

Organizations like Capital Workforce Partners are doing more than ever to build up Connecticut’s supply of skilled workers, but it’s not meeting the need yet, Lawton said.

“We absolutely need more of that because right now there aren’t enough people filling the pipeline,” he said. “We’ve got more people retiring than are coming into the industry and, consistently in all companies similar to us, you see an aging workforce.”

With some training, those workers could help meet the demand of Connecticut’s fastest-growing fields, Boucher said. Manufacturers in the Hartford area, for instance, expect to see about 1,500 to 2,000 job openings in the next year, according to a January survey by Capital Workforce Partners.

“It’s only a grim picture if it stops at the layoff,” said Daniel Garewski, who manages special programs and engages employers for the organization. “There’s always people getting laid off from retail but it’s not the end of the story. There are the resources now to help people transition into sustainable careers and careers where they’re gonna have a lot of skills and credentials that are transferable.

The region is also home to about 8,500 young people ages 18 to 24 who are not working or attending school; about 36,500 people who left school before the ninth grade and may lack basic reading and math skills, making it difficult to apply or qualify for jobs; about 3,000 parents receiving temporary welfare while they search for work; and about 2,000 people in any given year who are released from prison, about half of them returning to Hartford.

More support is needed to lift up those groups, Boucher said.

But the “dislocated” workers program is a start. For Rosado, manufacturing has brought a sense of purpose and compensation that reflects his value. In fact, he stands to earn a six-figure salary in a few more years, an improvement from his $60,000-a-year pay as an underwriter five years ago.

Just as important, he said, is the stability that he draws from his new skills.

“I’m not gonna have to worry about being laid off anymore,” Rosado said.

Rebecca Lurye can be reached at rlurye@courant.com.
Read this full article online.