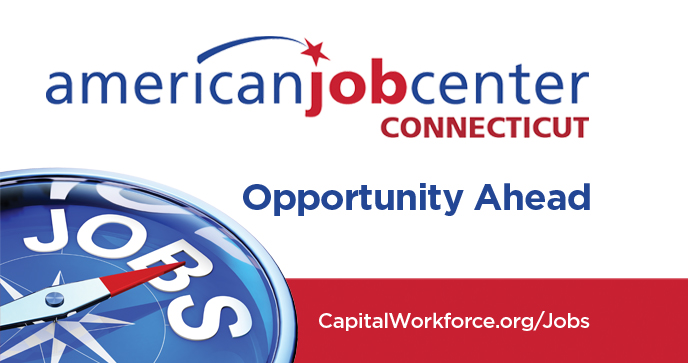 Enfield’s American Job Center has relocated to Asnuntuck Community College Campus, 170 Elm Street, Enfield CT.  Through our unique partnership, we look forward to serving more Enfield residents and offer more resources. Customers coming to the center will be able to utilize both Asnuntuck Community College’s and American Job Center’s resources, which will include attaining certification(s) required for sustainable employment in the core industries of our region.

In 2016 – 17 Capital Workforce Partners ran an outreach campaign of the American Job Centers in collaboration with the CT Department of Labor to further publicize job seeking and employer services.  Open houses were conducted in early 2017 to provide additional attention. In reviewing the number of job seekers visiting the Centers, according to CTHires data, an increase in customers were realized over the year, in particular the spring of 2017.

On Tuesday, April 18th, Capital Workforce Partners completed its round of Open Houses with an event at our New Britain American Job Center located at 270 Lafayette Street.  CWP hosted a tour of our new facility for job seekers, former customers, and our community partners.  We also had Congresswoman Elizabeth Esty, from Connecticut’s 5th district, Connecticut Department of Labor Deputy Commissioner, Kurt Westby, Bill Carroll, New Britain’s Business Development Director, and Rick Mullens from CCSU’s ITBD for a round-table discussion about Workforce Development in New Britain and the North Central region.  Some areas of discussion were addressing the skills gap in Connecticut and recognizing that there are many jobs in Connecticut, but which require a certain skill.  Once those skills are gained, work is available at wage that sustains a family.  We also heard some success stories that demonstrate the value of Workforce Development and the American Job Center.  One of these success stories was of Keith Ratte, who used the American Job Center in New Britain and, eventually, through the American Job Center Business Services, was connected to a job at Okay Industries in New Britain as a Laser Processer Engineer.  “The American Job Center really helped me in not only searching for a job, but with emotional support in what can be an emotionally trying time.  They helped me keep a positive outlook in knowing that a job was out there for me.  If there is one wish I have, was that I’d find the American Job Center earlier, as it was one month after I was unemployed that I found this great resource,” said Keith. Stories like what we heard from Keith is part of Capital Workforce Partner’s quest to Align Vision to Action, so that we can help many more Hartford area residents realize their vision for sustainable employment.

“I had the opportunity to sit down with folks from the American Job Center and Capital Workforce Partners, as well as representatives from local businesses, to discuss what we can do to better prepare our workforce so they are ready to meet the demands of a 21st century economy. We need to work together to find bipartisan solutions when it comes to ensuring folks have the right skills and training they need to succeed. Building a partnership between the public and private sectors allows folks like me to better advocate for the business community on a federal level, and ensure they are receiving the support and resources critical to Connecticut employers and employees. Connecticut is fortunate to have a well-educated and well-trained workforce, and it’s on us to utilize our potential, and find new and exciting ways to keep Connecticut’s economy competitive and strong.” Said Congresswoman Esty

“Capital Workforce Partner’s funding is made possible by the United States Department of Labor through the WIOA (Workforce Innovation Opportunity Act) Legislation.  With this funding, success stories like what we heard from Keith and several others in this round-table discussion, is made possible.  We thank Congresswoman Esty for her support and our partners as we work towards closing the skills gap we see here in Connecticut,” said Alex Johnson, President and CEO of Capital Workforce Partners.

Employers in the community, such as Stanley Black & Decker, an internationally known tool manufacturer, who had its start here in Hardware City, spoke to the value they receive through the American Job Center.  Danielle Johnson, Stanley Black & Decker Human Resources Generalist, talked about how the American Job Center has helped with onsite recruitment events that has helped, in part, in hiring around 70 machine operators and quality control inspectors in the last six months.  Companies like Stanley Black & Decker will soon be facing a workforce that is aging out and is in need of hard working, skilled workers to replace those who will be retiring in the next 3-5 years.

Capital Workforce Partners, in partnership with the Connecticut Department of Labor, hosted its second open house of the day on February 21 in its American Job Center located at 786 Enfield Street in Enfield. We hosted a Career Services Info Session (CSIS) which gives an overview of the variety of services offered to the Enfield area. In this session, we had several job seekers along with the US Congressman from Connecticut’s Second District, Joe Courtney and Enfield Mayor, Scott Kaupin.

We also had a roundtable discussion with Enfield employers like Advanced Auto and Eppendorf (a manufacturing company) and with job seekers to discuss what the American Job Center can do to better serve the Enfield community. During the session, several job seekers talked about how they are just learning about the system and are looking forward to taking advantage of the services offered. Others spoke about how well the system has served them and would recommend it to anyone. “It was great to hear from the job seekers and get feedback on how we can improve our system as that is something we are focused on. It was also wonderful to have the opportunity to showcase our workforce system and the importance of WIOA (Workforce Innovation Opportunity Act)” said Alex Johnson, President, and CEO of Capital Workforce Partners. “It was great to visit with Capital Workforce Partners and learn about all they do. I like the metaphor used by Tom Perez (former Secretary of Labor under President Obama) that Capital Workforce Partners and the American Job Center system is like match.com for job seekers by matching job seekers with employers and employers with job seekers. I see the value of the WIOA passed in 2014 and how it helps many residents find real jobs that can sustain them” said Representative Joe Courtney. “It was great to see how a Job Center works and to see the interaction between job seekers and employers. As mayor, I appreciate having the American Job Center here in Enfield, and I feel they do a great job serving our Constituents.” Said Enfield Mayor Scott Kaupin.

Capital Workforce Partners, in partnership with the Connecticut Department of Labor, hosted another open house to showcase all its services within the Manchester location at 893 Main Street. All of our American Job Centers are here to serve you if you are out of work or seeking better work. Open house guests participated in our Career Services Information Session to learn about the variety of services available at the American Job Centers. Services include resume critiquing and writing, assistance with cover letters, interviewing skills, and certifications in skills that employers are seeking. We also help make connections between area businesses and qualified employees by hosting recruiting events within the American Job Centers or through direct connections. We had the honor of hosting Mayor Jay Moran of Manchester, Congressman Larson’s staff, and representatives of Manchester Community College, Manchester Adult Education, and local business owners.

A common theme in our round table discussion was word need to get the word out about the American Job Centers and how they can help anyone seeking a career, not just a job. “We are committed to sending a message to the Manchester community and the greater Hartford area to let the public know that the American Job Center is here to serve you. We want to reach people who have not heard about our system” said Alex Johnson, President, and CEO of Capital Workforce Partners. “One of Manchester’s and the State of Connecticut’s best-kept secrets is the American Job Center. We hope the word gets out more about all they can do for Manchester and anyone seeking something better.” Said Mayor Jay Moran of Manchester.

Capital Workforce Partners in conjunction with the Department of Labor hosted an open house to showcase the many services offered for Hartford area job seekers at the American Job Center at 3580 Main Street. Whether you are out of work or seeking something better, your local American Job Center is ready to help. We offer services including; resume critiquing and writing, help with cover letters, interview skills, and training in various skills relevant to today’s market place needs. We also help with making connections with hundreds of area businesses via direct connections or numerous job fairs hosted in our various American Job Centers in the Hartford area. We also had the honor of having Mayor Luke Bronin visit our center to discuss employer related issues in the Hartford Area.

“Thanks to Capital Workforce Partners and the CT Department of Labor for hosting a great discussion with residents about the American Job Center,” said Mayor Bronin. “I’m thrilled to be part of the conversation with the AJC, where a great team is working every day to help people overcome obstacles to employment and connect job-seekers to opportunities.”

“This is just the beginning of a campaign to raise awareness of the American Job Center system, we no longer want to be the best kept secret. We want every North Central CT resident to know the AJC has the services, staff and technology to help them advance on a career pathway and achieve well-paying jobs.” Said Alex Johnson, President/CEO.